Resilience comes from flexibility. In the Resilient Stöckach, building function can change over time in a productive landscape that allows for urban farming, commerce, education and home life to co-exist into the future.

THE DEEPER IDEA
The key concept driving the design at every scale is how to manage change. Resilience can be achieved through resistance to change or through flexibility. The challenge with resistance is that it assumes the future can be predicted and the measures we take are enough. A difficult assertion at best. With that in mind we aim for flexibility.

The first assumption is that resilience based on resistance is at best a short-term solution to a long-term problem. One need only look at recent disasters around the world, where flood protections are regularly overwhelmed, levies broken, wave barriers built too low, predictions overturned by unexpected reality. Change is not limited to disaster. We also must manage the unexpected effects of technology, from the adoption of smartphones to autonomous vehicles and the appearance of sharing economies and artificial intelligence. We can guess the future will be very different from what we know today, and that change will come sooner rather than later. If the only way to manage such changes is through legislation and the adoption of new policies, then our cities and architecture will not be able to cope. We need to reconceptualize our built world so that it can accommodate change at the small scale while policy and regulations catch up.

EXISTING BUILDINGS
The existing underground parking is maintained throughout the site, reinforced as needed to become the foundation of urban farms, daycares, and homes above ground. If parked cars become less prevalent in the future the parking is to be converted to large urban farming complexes or other functions.

Bunkers are maintained in place and proposed to be converted to water storage, collecting rainwater from the site. This function can be reversed if needed at a later date, however the location deep underground fits the purpose well.

Buildings10 and 40 are proposed to be stripped to their skeleton frame and repurposed. Building 10 will become an office building with a daycare on the ground floor while Building 40 will become an urban farm and continues its role as a meeting place and gymnasium.

NEW BUILDINGS
Using a prefabricated structural timber system we aim not for 100-year homes, but for 100 open-ended buildings that can adapt comfortably, without waste. These 100 open-ended buildings embody the principle of achieving resilience through flexibility. Easy to build, easy to dis-assemble, the ambition is to create an urban culture that will last well into the second half of the 21st century.

WATER CONSERVATION
Water is collected on site and will be used to maintain the landscape, including a riparian zone that will ameliorate the expected increase in temperature as global warming continues. The riparian zone will also act as the host for a more diverse urban ecology, an important feature for future cities where urbanism must include active ecosystems. Building on this starting point, each building will collect water on its roofs and have a cistern for grey water and water filtration. The ambition is to make the entire site a net-zero water consumption property.

ENERGY
With roofs used almost exclusively for green planting, there is a limited amount of solar energy produced on site. Highly efficient panelized construction combines with wood structure to create a low consumption. Rather than using valuable roof space for energy production, we propose to combine windows with shading devices made from panels that are operable, allowing for local energy production in each unit that is entirely controlled at the unit scale.

SITE PLANNING AND LANDSCAPING
The buildings are located on the site in order to open the area to its surroundings, becoming a nexus of food, energy, water, and cultural innovation for the neighbourhood. Metzstraße is extended to the roundabout, while Heilandplatz is connected to the larger property in order to create a focal point around the conjoined streets and to slow through traffic. As a whole, the site acts as a kind of connecting green space that flows through Villa Berg, towards Schlossgarten and a future green space that will be developed with Stuttgart 21.

An opening made in Building 10 creates a new connection across the site and between Metzstraße station and Karl-Olga-Krankenhaus station, reinforcing the mass transit network already in place.

Buildings are distributed on the site in a more open arrangement compared to the courtyard typology typical of the area in order to create a productive landscape. Following the contours of the sloping site, the landscape design shifts from a hard, urban presence to a cooling forest and on to a riparian landscape. These efforts will reduce the heat island effect and act as a cooling landscape in the summertime, reducing the impact of rising temperature and providing a place of beauty for both residents and visitors.

DIVERSITY
Daycares are split into two sites on the northern and southern edges of the property. Outdoor spaces are protected by organic shaped screens that afford children protected places to play and simultaneously create a dynamic street atmosphere. Located next to a forest in the south and a riparian wood in the north,they are perfect places for children to learn and play.

The ground floors of most of the buildings are open to the landscape, with housing above. Depending on the location and the current needs, these areas can be used for commercial functions, community spaces, home offices, tool libraries, or functions yet unimagined. While there is room for change at multiple levels, the buildings also provide assurance of quality, with access to clean air, safe play areas,terraces for most units and bicycle parking in each building. Cars are parked within a short walking distance of all buildings, providing the benefits of a lively street life, free of cars (with plans made to accommodate emergency services), and a destination for others. These will all contribute to the development of a singular local culture that can become a model for the city as it builds its future.

40% of the housing is allocated to affordable housing. They can be easily constructed and reconstructed at any location by making use of pre-fabricated and systemized structures. Affordability is an essential aspect of resilience, whether from a social, ecological or economic perspective. The organizing structure of the design explicitly aims at the triple bottom line approach to support the development of a strong and integrated community, a central requirement for sustainable and resilient design.

THE FUTURE
A new parking structure including an underground space and a tower are planned so they can be converted to housing, urban farming or other functions in the future. Rather than building overly large structures, the approach here is to build smaller buildings of various sizes that can be easily modified as required. The smaller the scale the faster the change can be implemented. As such, small kiosks are placed at the eastern edge of the site, while taller buildings are located towards the north. Within each building the modular system is intended to allow for constant change of use, on the ground floor, and if desired also for units on the floors above. As the nature of work, mobility, recreation, and production change the best choice is to build in a way that change can take place easily over time at multiple scales. In other words: the Resilient Stöckach. 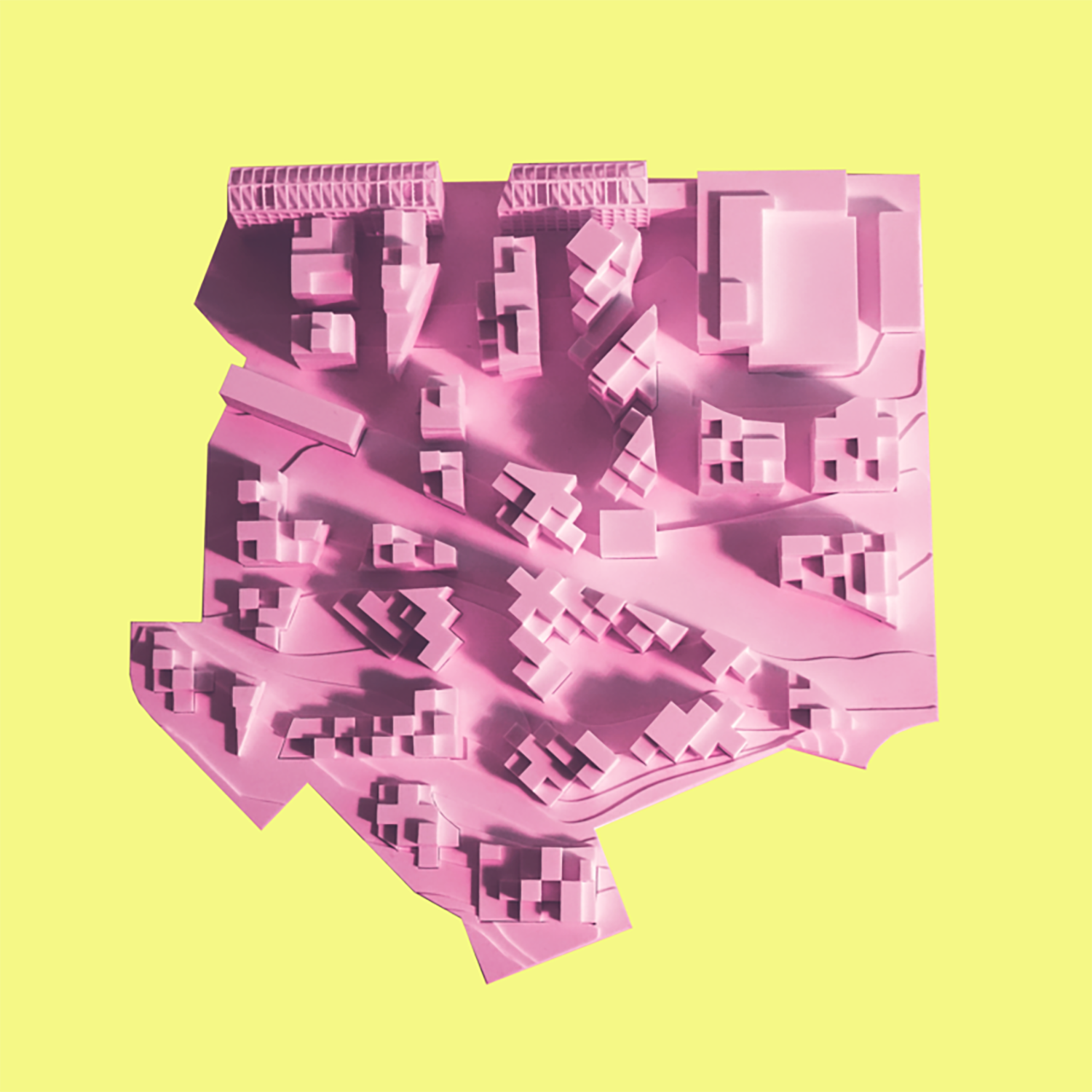 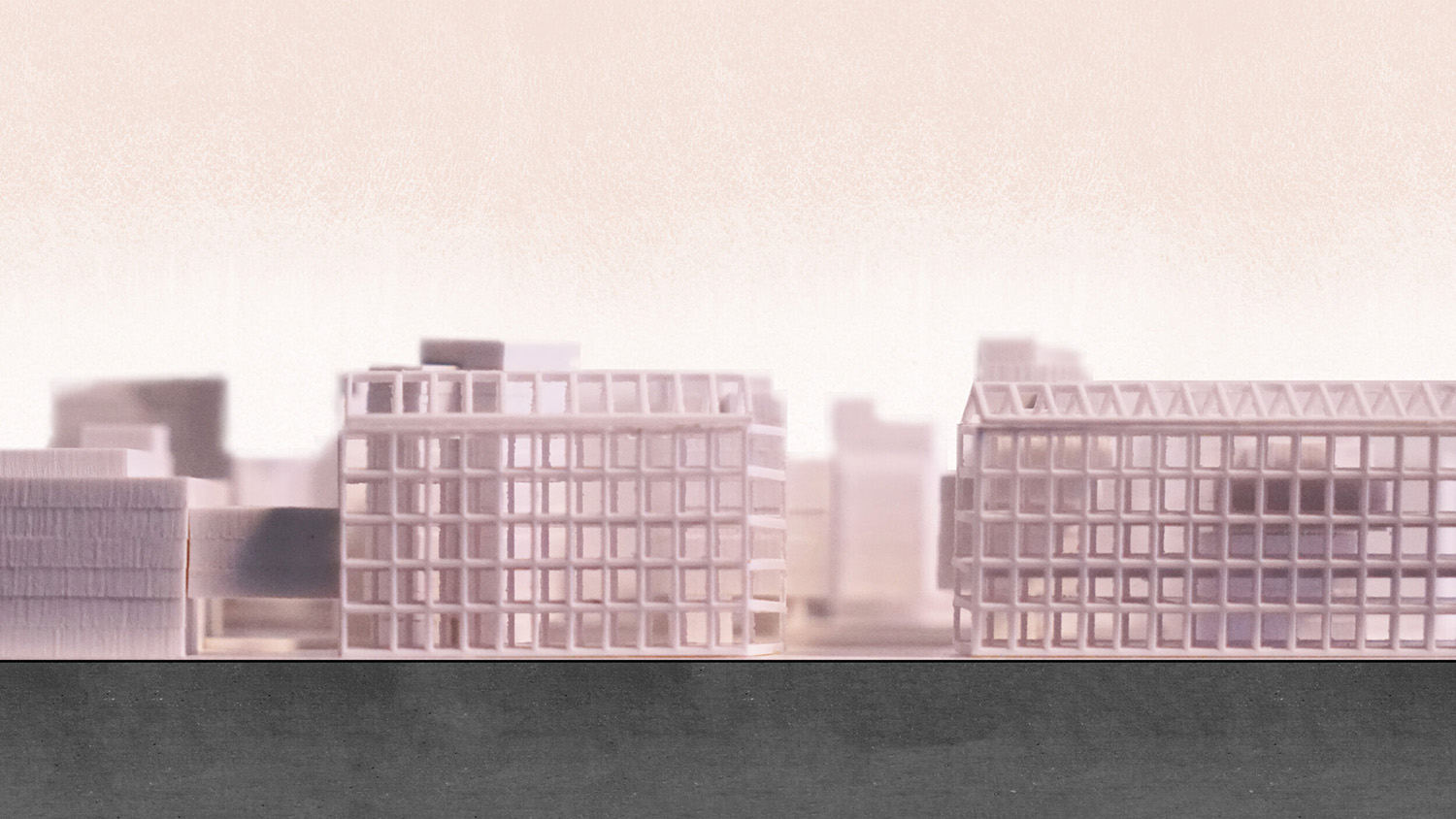 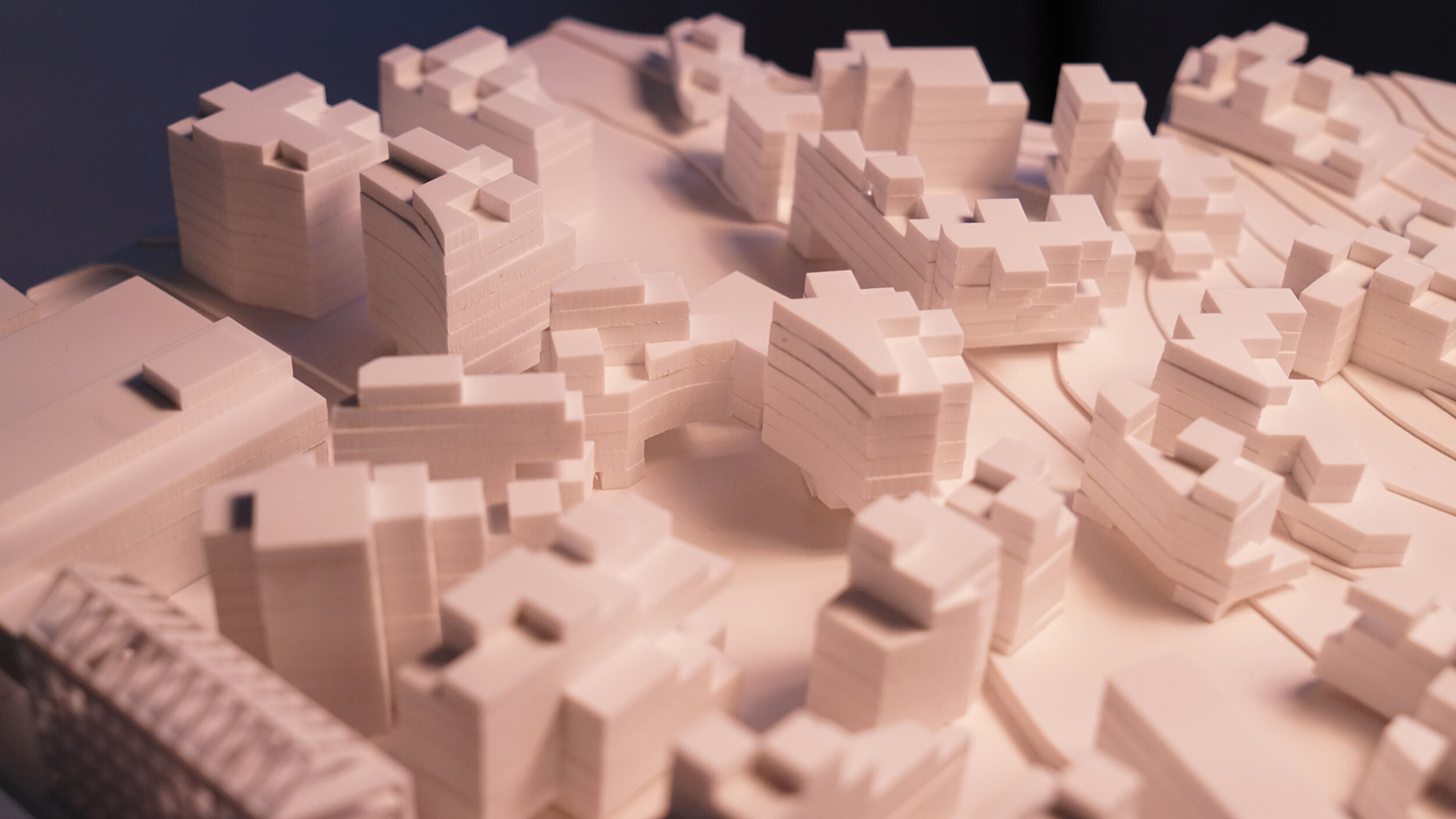 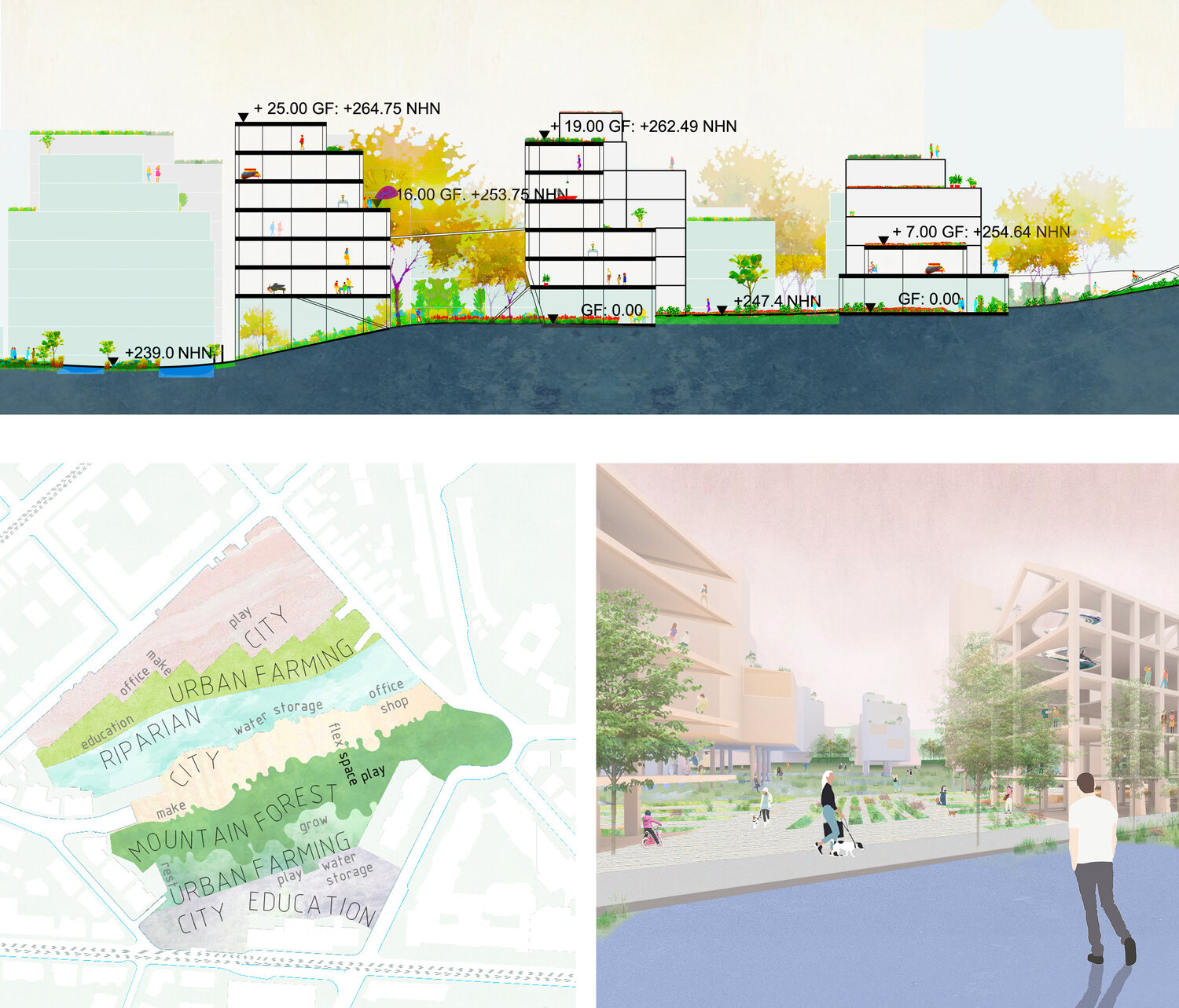 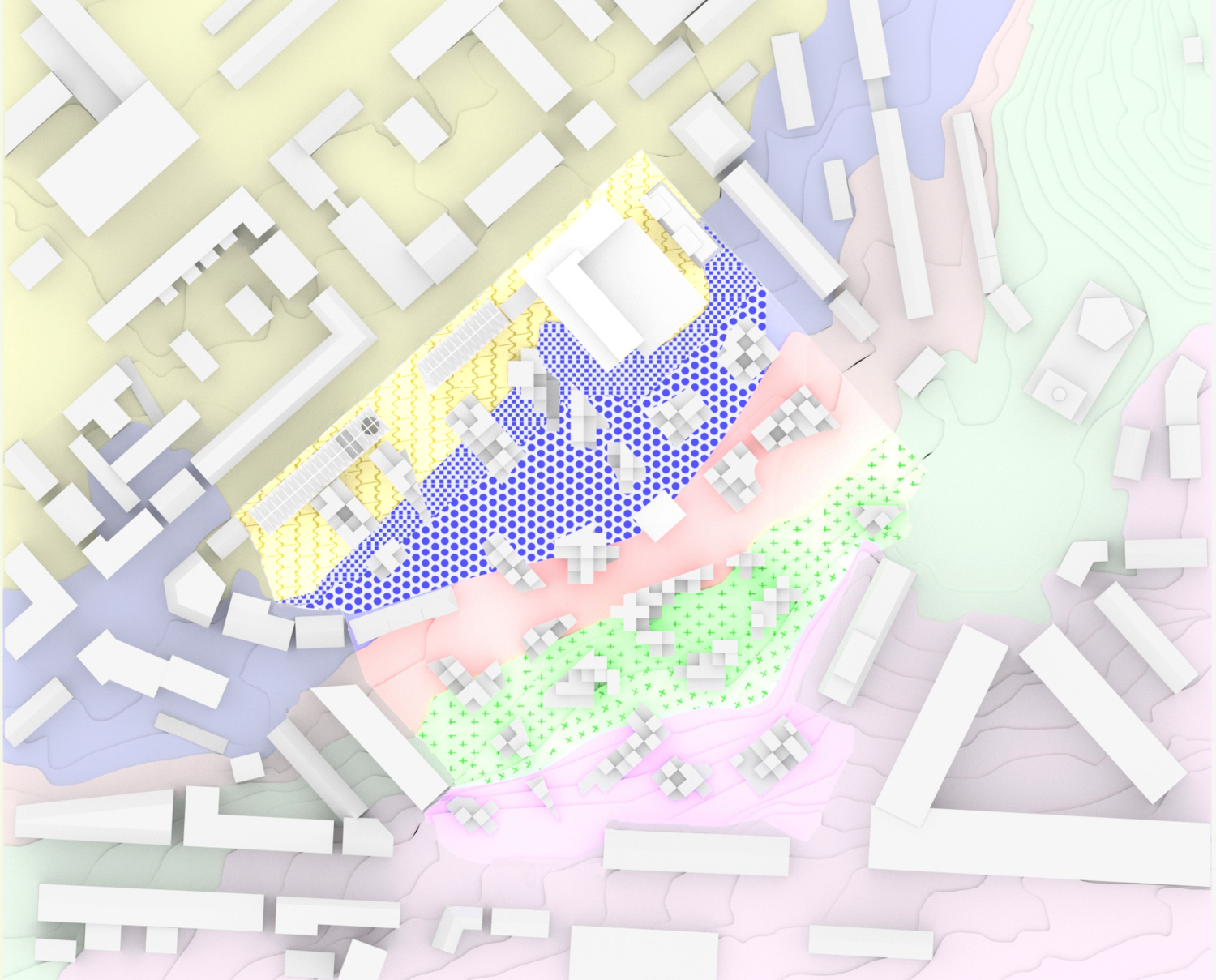 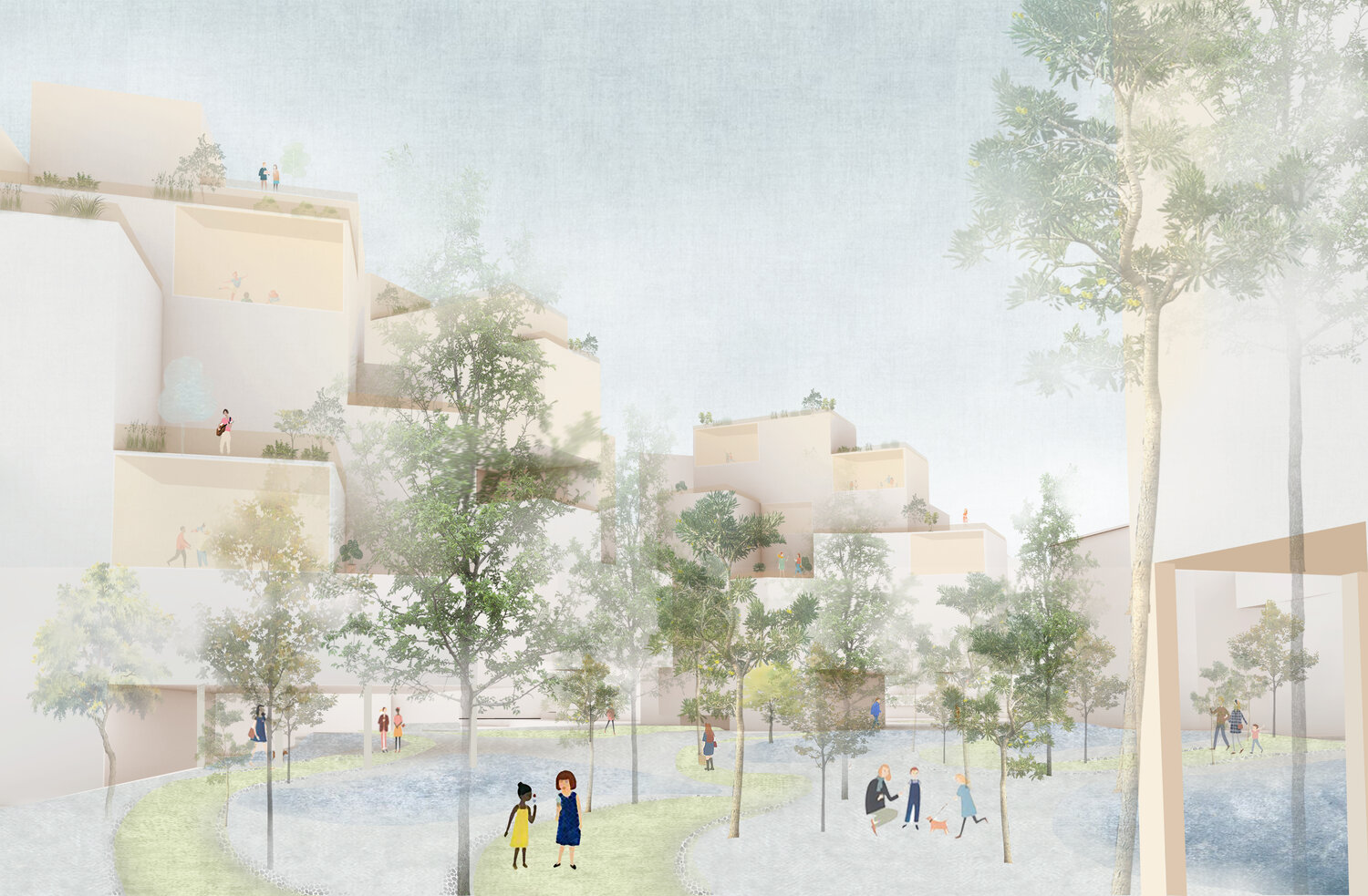