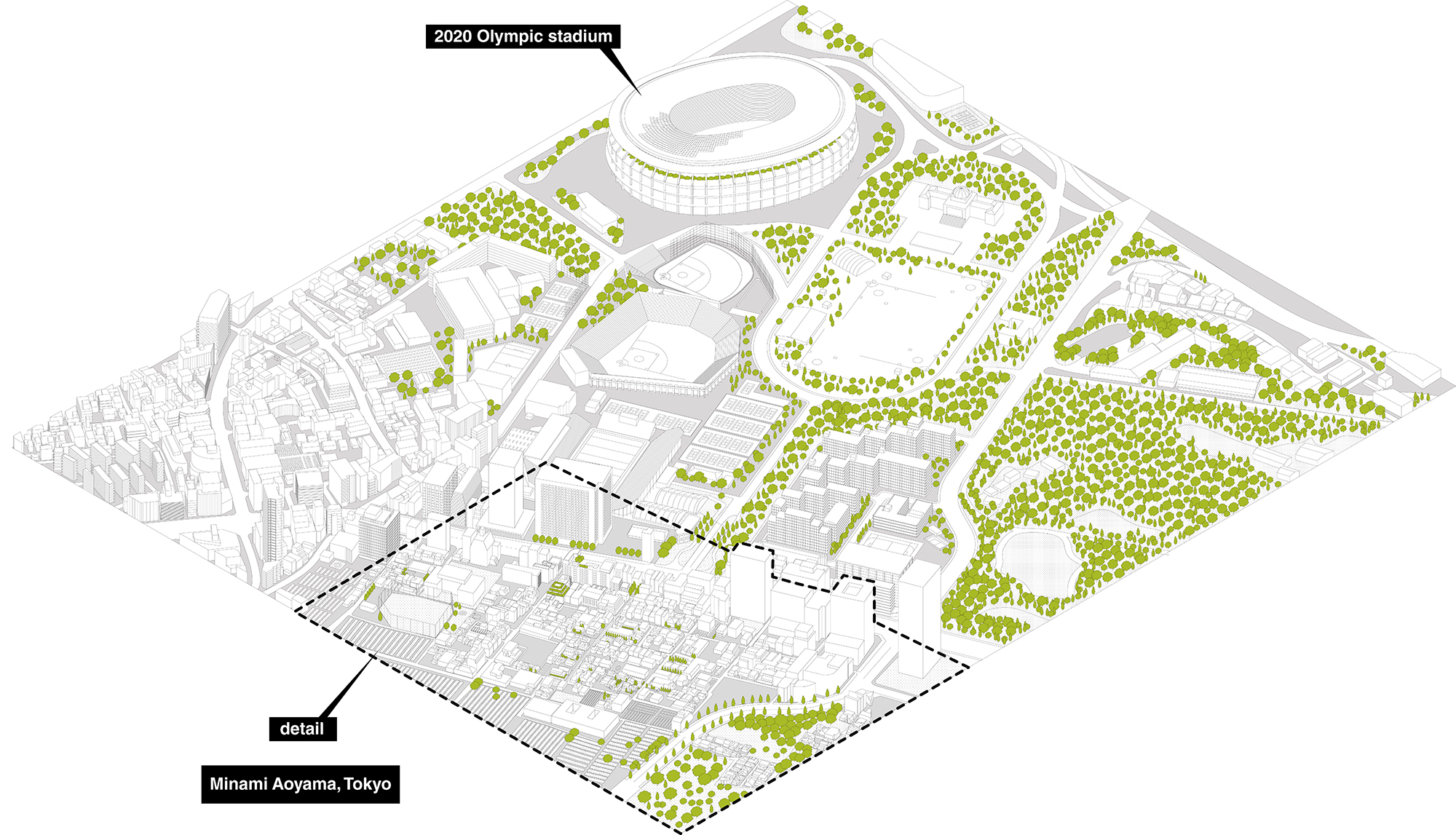 It is not hard to imagine a short list of rules that would describe an ideal housing model. It would include the hard, physical rules about buildings and typologies. It would include soft rules about community and the role of people in the neighborhood. A self-aware list might also include regulations to govern the economics of a development, about who pays for what amenity, and who has access to begin with. The list could easily extend to some length, and contain a great amount of detail to cover every wish, every desire. A Japanese rulebook, however, could be very short, and it would not necessarily be about housing at all. Or at least it would not need to be.

With some exceptions, housing in Japan happens on its own, from the bottom up. The essential rules are about the city and they are defined with a light touch. Much is allowed from that gesture and it is worth a deeper look. 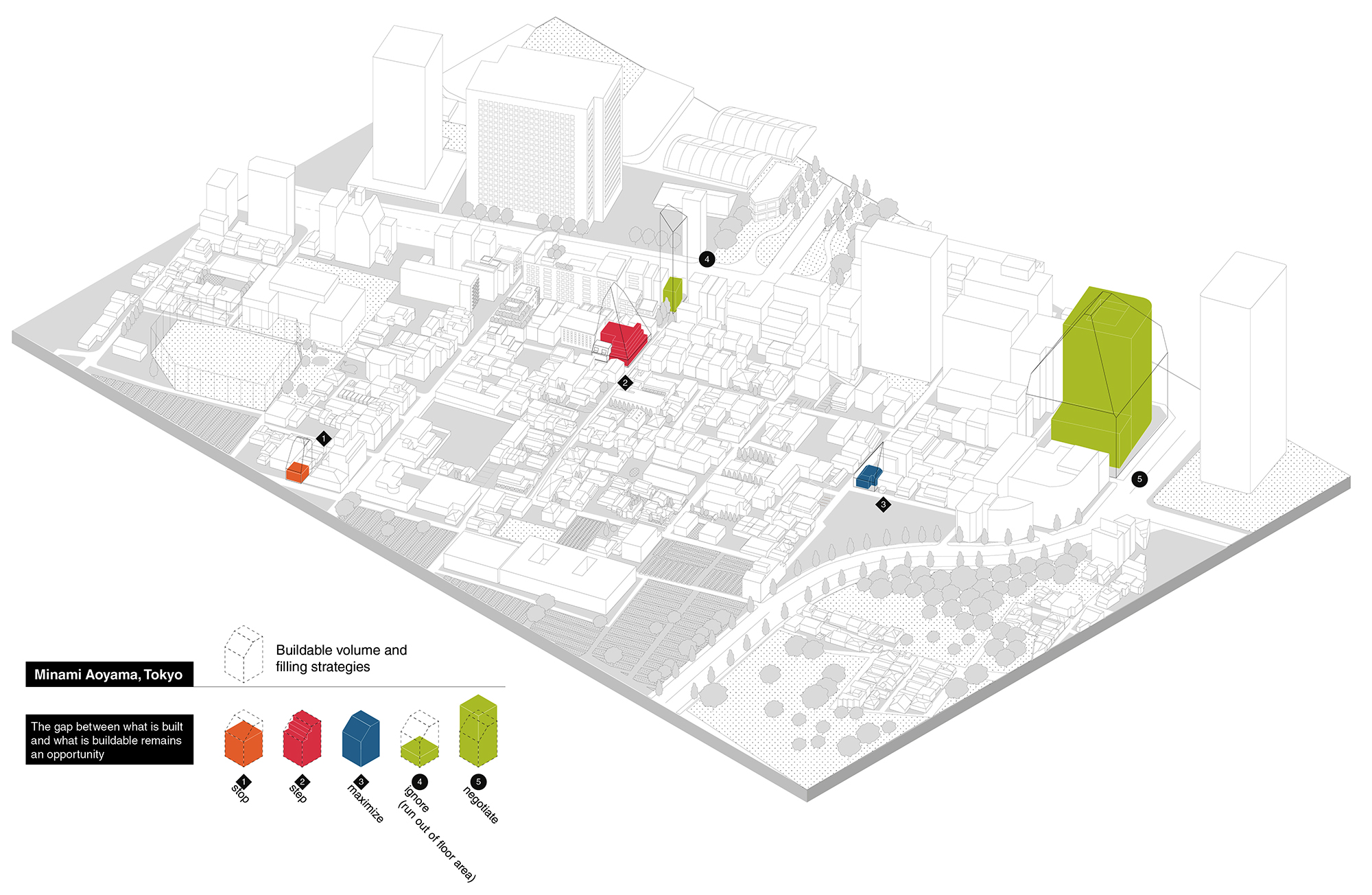 The quality of housing in Tokyo is defined only partly by the architecture. The greater effect comes directly from what the city affords. The problem is that making sense of the city is not straightforward. Like all cities, Tokyo is filled with contradiction. It is, for instance, impeccably clean. Early in the morning, in the entertainment districts, in the streets that surround Shibuya crossing, or in parts of Roppongi, it is possible to find some of the grime one expects of a megacity with a population of more than 30 million people. But it is cleaned up by the afternoon, almost apologetically. An army of uniformed cleaners can be seen throughout the city picking up litter, sweeping the ground of detritus. Where they are not at work, shopkeepers and residents take up the slack. At the same time, after a short walk through any part of the city even a casual observer will notice the buildings are often unkempt, cheaply built, each one obviously designed without regard for its neighbors. Building heights are seldom aligned, setbacks are a mixed lot, and the relationship between building and street appears to be random. The material finish of buildings is even less predictable. Some are finished with tile, others with stone, quite a few are covered with a synthetic stucco that recalls lumpy plastic. 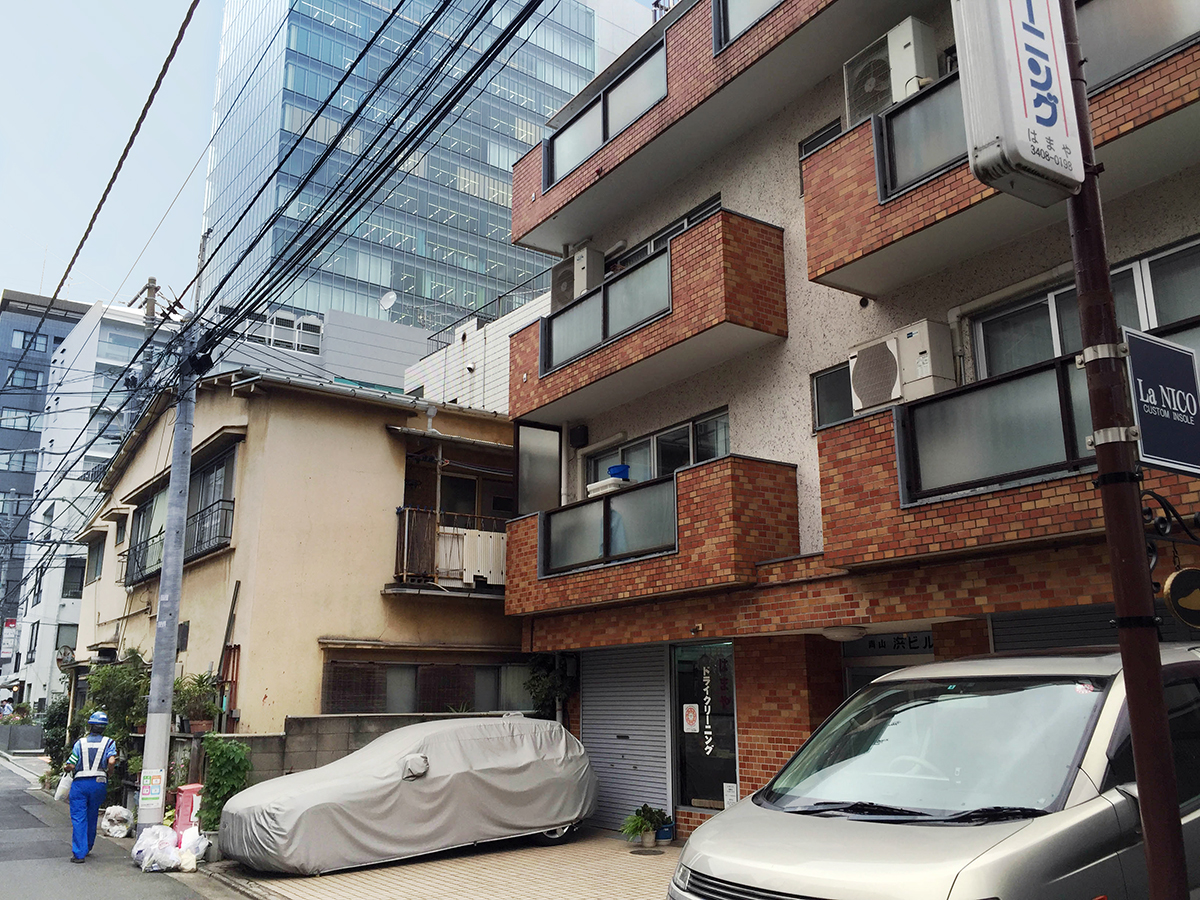 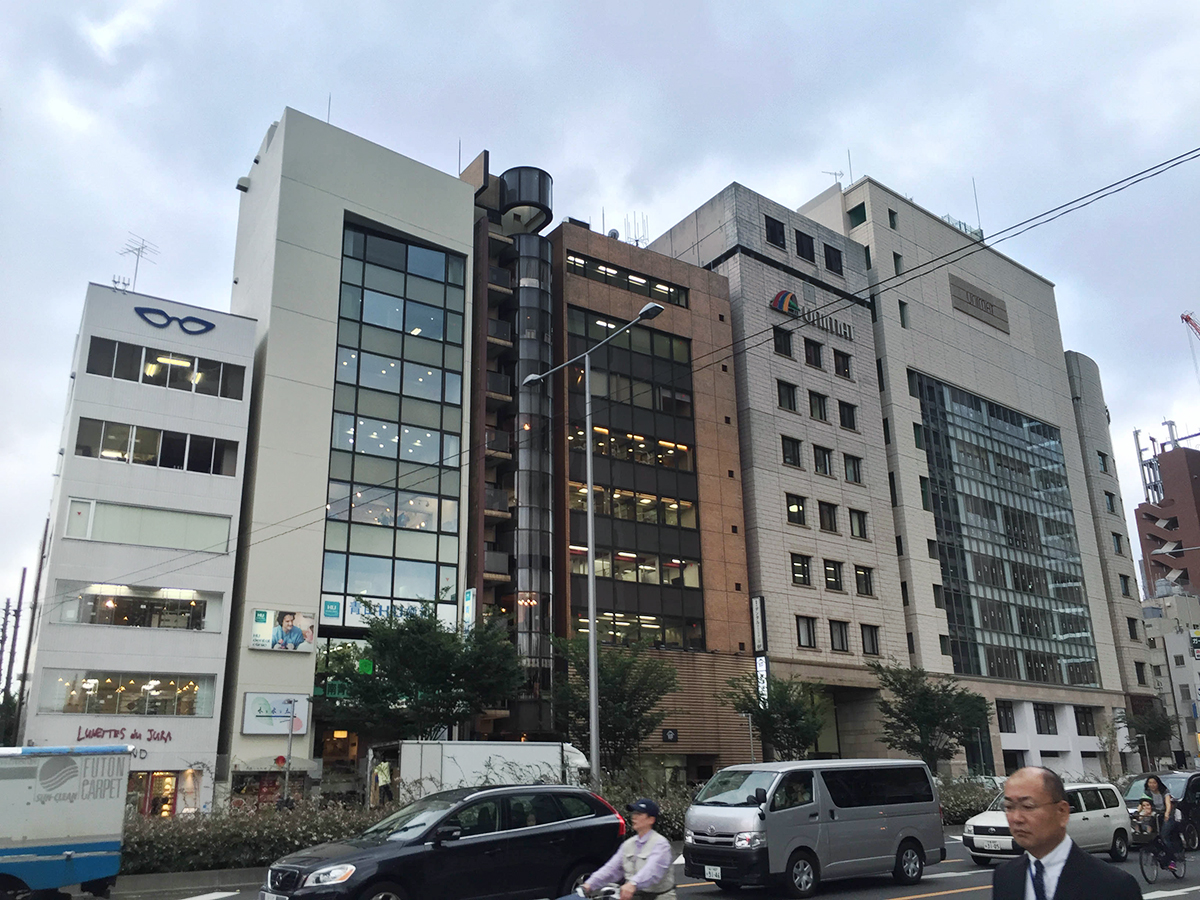 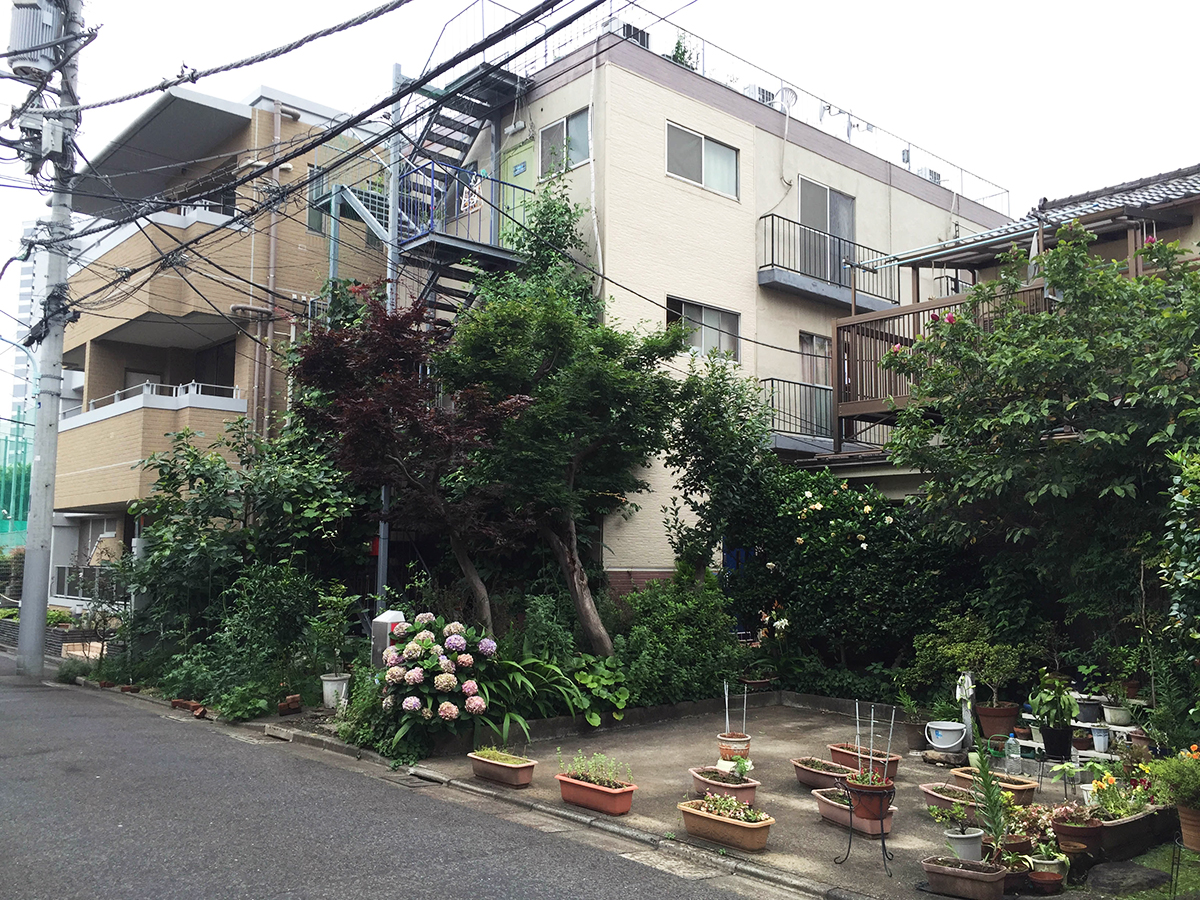 So the streets are clean but the city is a logical mess. There seem to be no rules in fact - an idea reinforced by the way properties are used. In a single neighborhood, on a single street, and sometimes within a single building, we find housing, offices, and shops distributed without concern or coordination. Economics might explain this phenomenon. Less easy to explain is the easy mix of wealthy and poor residents in the same area. An expensive high end home comfortably sits next to a middle class apartment, or a narrow block of cheap one-room units rented out by the month. This must be cultural. Maybe Japan simply does not care about order, social, physical, or otherwise? The irony of this possibility compared to the reputation of the nation is not lost. While we expect there must be rules governing the shape and order of buildings in Tokyo, it is not obvious what they are. How can a city be so precise and so chaotic at the same time?

As it happens, rules do exist, and they are firmly enforced. Thoughtfully delineated zoning maps exist for every neighborhood. There are local rules about planting, land use controls, all of the things we might expect in the West. But the expectation of those controls is entirely different. They are more akin to guidelines than prescriptions.

The entire nation is governed by a single set of zoning regulations, from Shibuya in Tokyo to a suburb in a rural town - the distribution is different but the zones, and their rules, are standardized. Stacked like a pyramid the zones are not exclusive, and instead allow more with step down a widening base of approved activities. An exclusively residential area (not actually exclusive as it allows small shops, clinics and services), is designed to ensure that buildings are not too large and to keep some functions out. As long as all of the buildings are more or less house shaped, it is not improbable to see a restaurant, a salon, or a doctor’s office appear on a quiet street filled with detached homes. The system becomes more interesting as we move down the pyramid. A commercial district does not prohibit housing. Instead of isolating functions the Japanese system slowly extends what is possible until (almost) anything is allowed. While there are some curious visual side effects, the flexibility that results is worth a second look, especially for those places around the world where housing and other needs are not being met because the system is inflexible, and hardened to change. 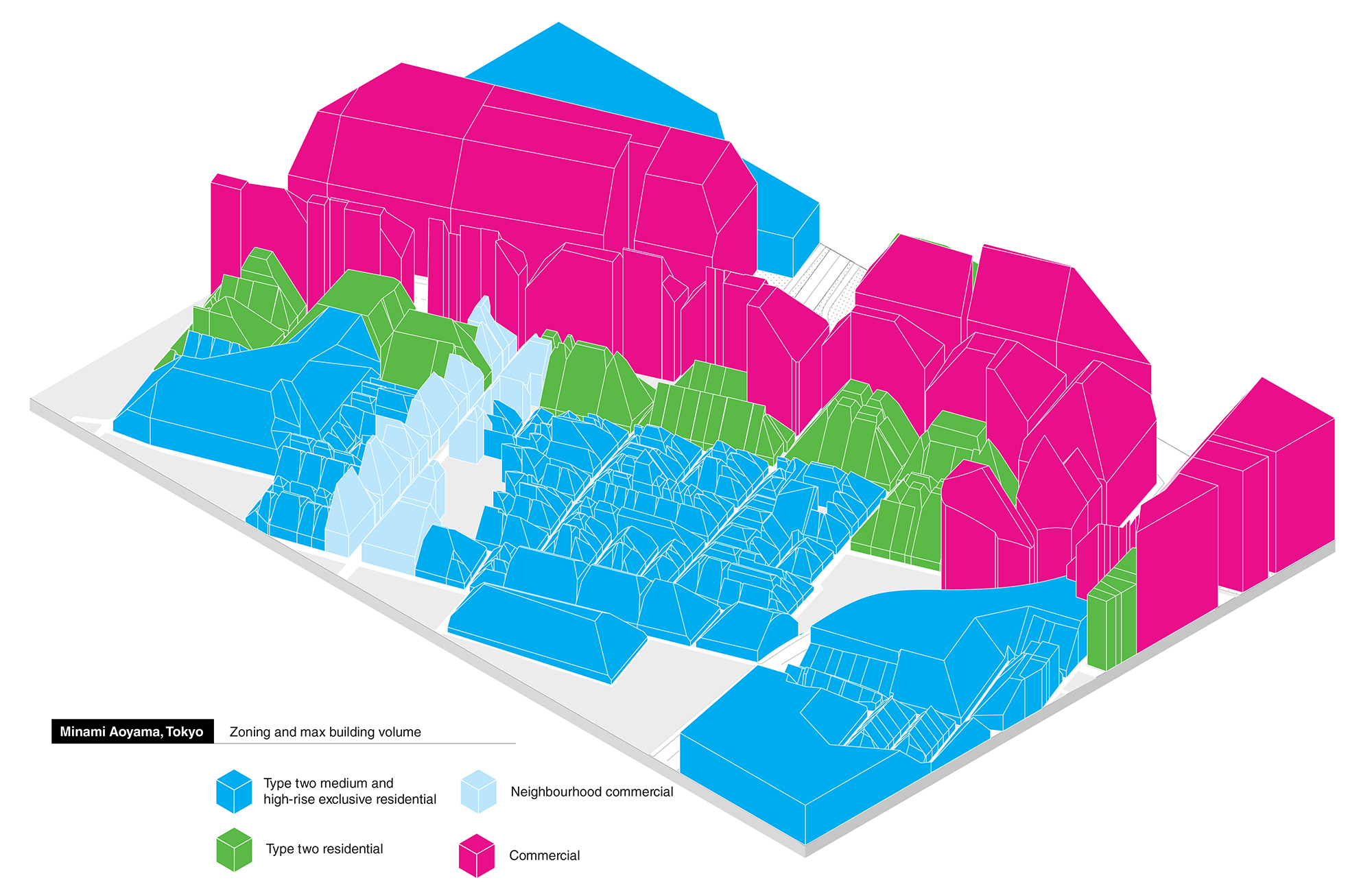 The essential rules for each zone are parametric, used to protect solar access for neighbors, and to maintain the scale of buildings. The outcome is a buildable envelope with a remarkable amount of leeway for what happens beneath its boundaries. Considering the rapid pace of construction and deconstruction of cities in Japan it is not surprising that change over time is not only easy, it is in fact inevitable. Architects working in this medium have almost unlimited freedom to experiment.

Recognizing this system for what it allows, especially the freedom to try new things, evokes a kind of naive belief in its potential. Land-owners can build what the market will bear and what communities need, as they are needed, without any change to the building code or to zoning regulations. Suburbs and city centers are equally walkable, mixed use, and responsive. Tokyo is clearly designed to be a living city, a place for experimentation, production of an infinite variety of form. Liberal regulations mean there is no great shortage of housing, even in a city so large. A side effect is that the streets are visually chaotic. The main effect is that the streets are also livable to a remarkable degree. 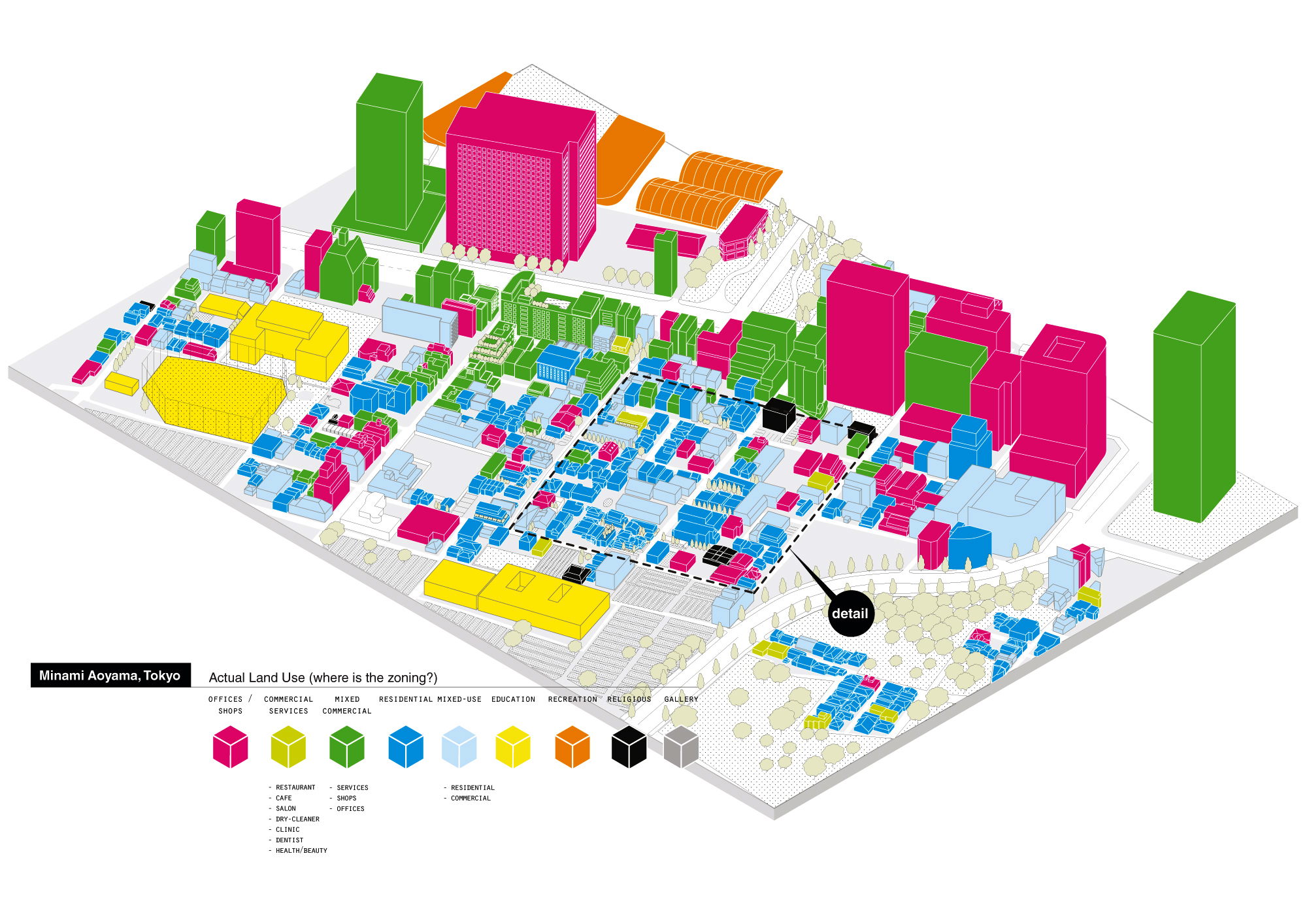 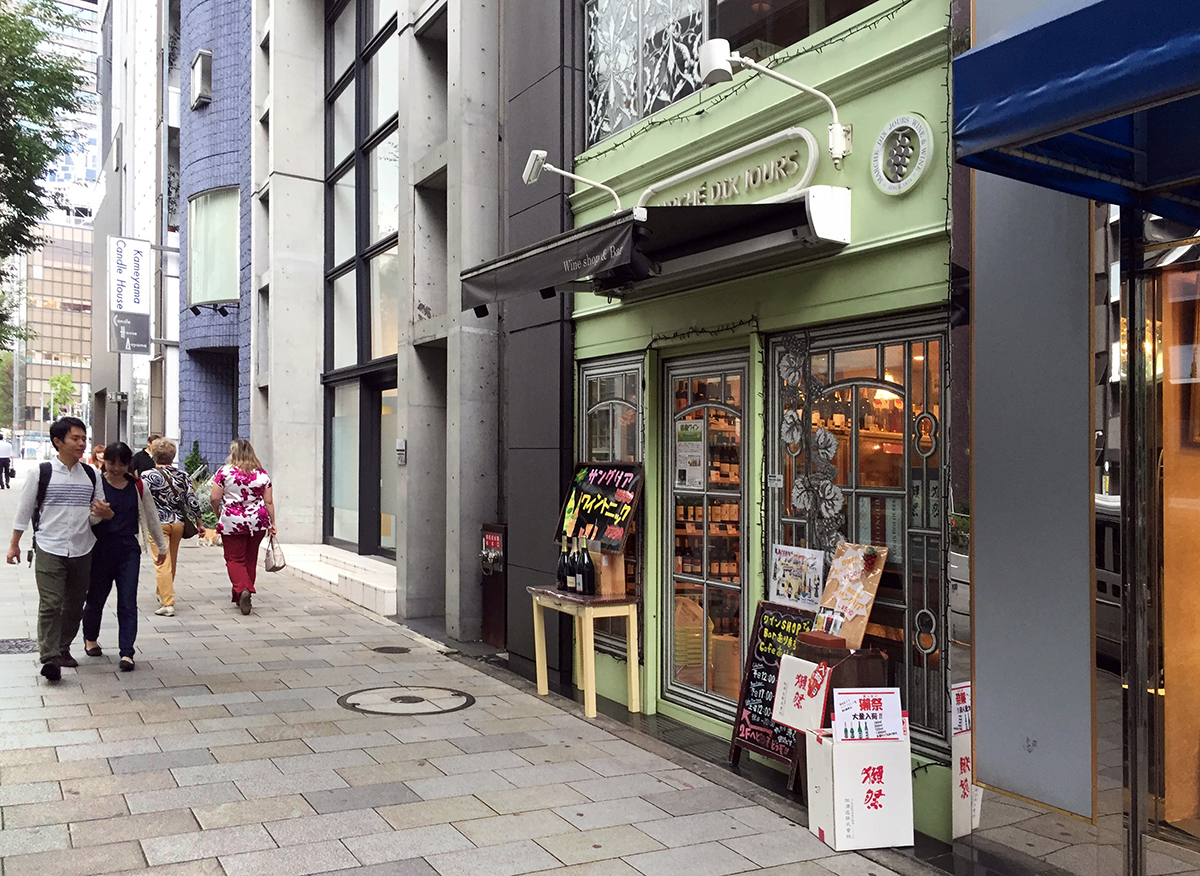 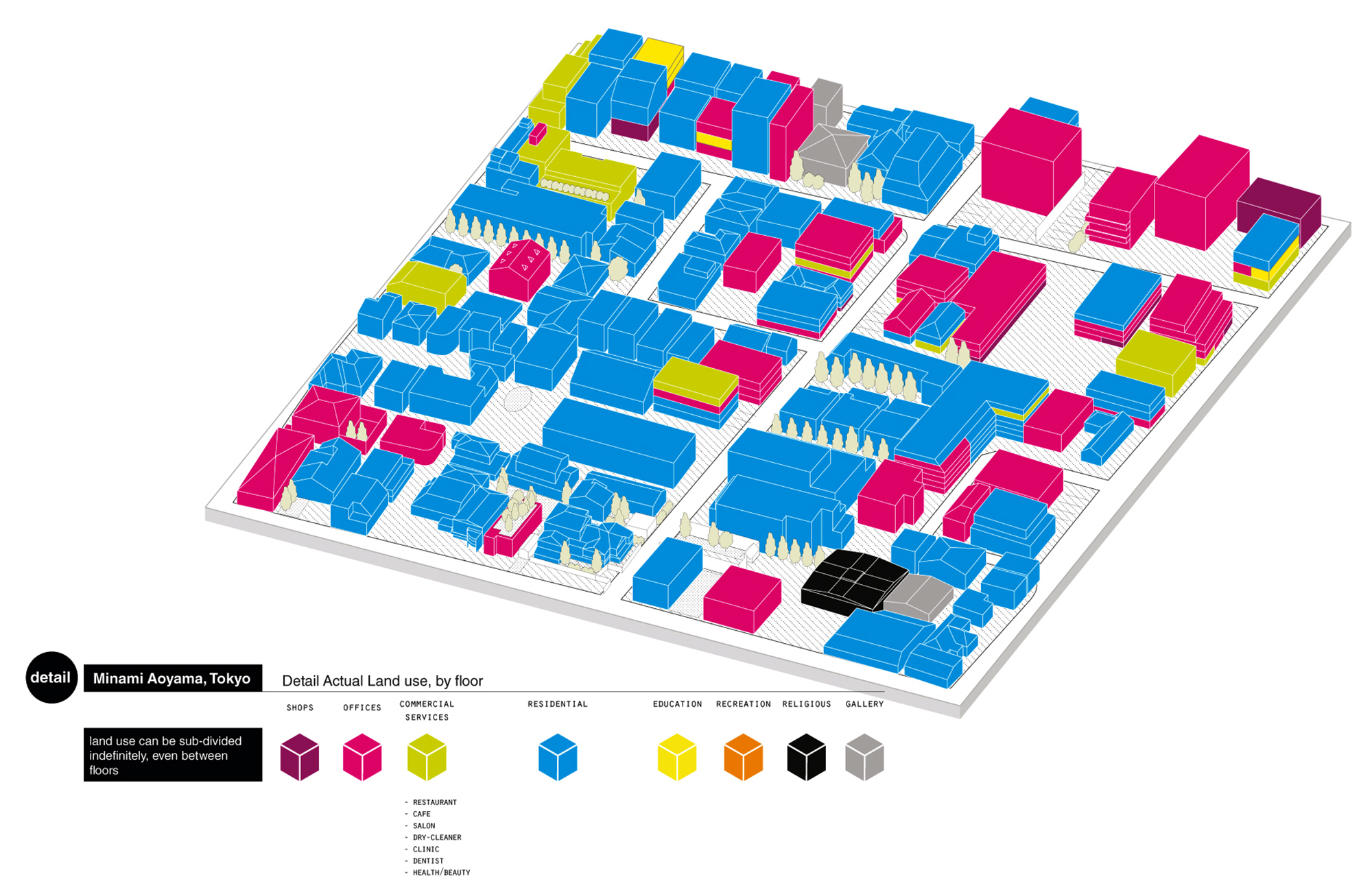 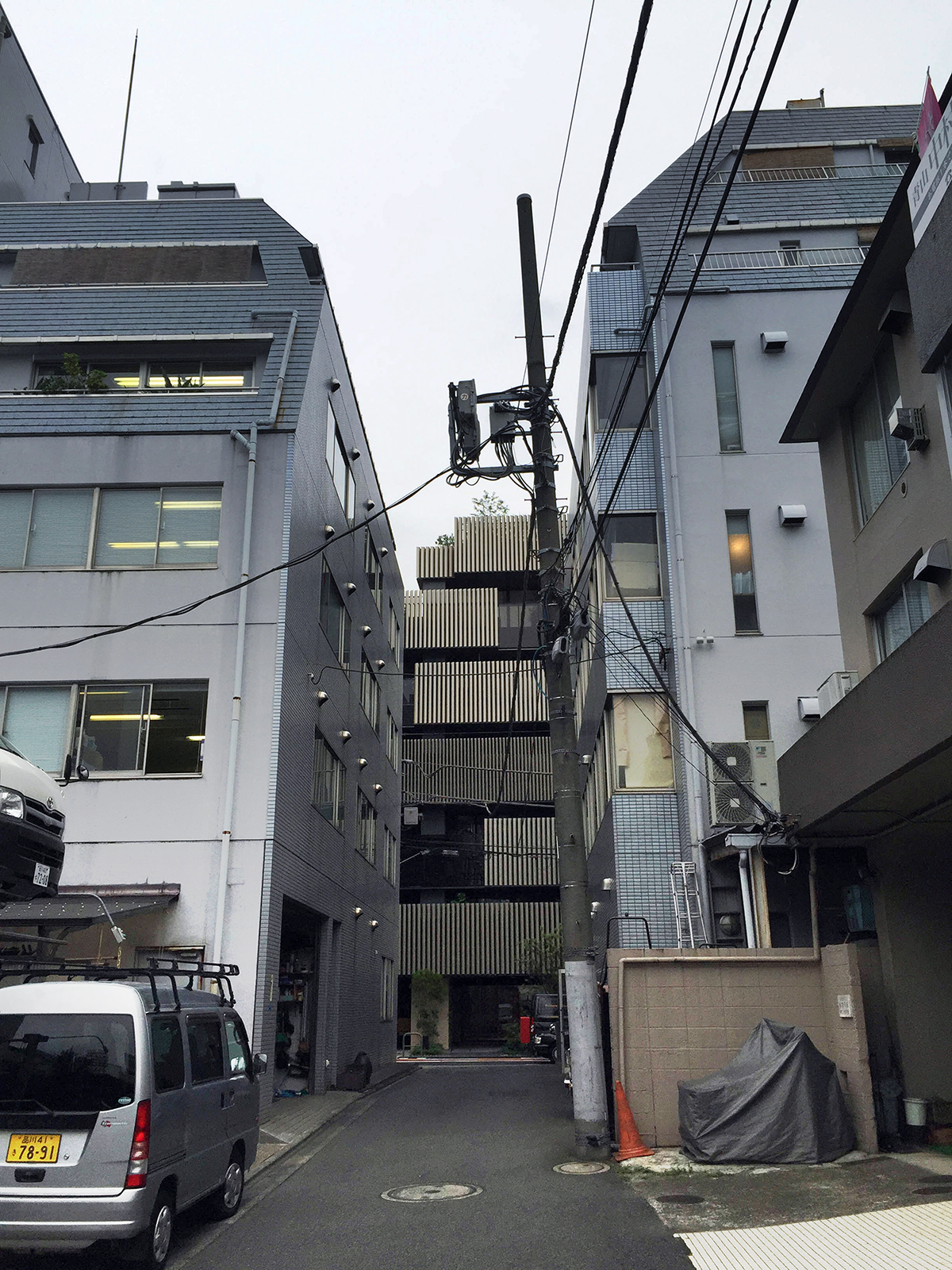 The rulebook that controls Tokyo is flexible. The future vision of the city is outlined but not planned in detail. The rulebook cedes remarkable power to individuals, and together they are given the chance to build community and larger urban forms.

There is however a gap between what is possible to build and what is usually built. Economics and culture limit the kinds of housing that appears on the streets. The thing is, with such a flexible framework, there are few limitations to what can be tried. If people are bold enough, new kinds of living will emerge. When needs shift (again) the city can move with it. Housing might be about typologies and politics, but it is also about the development and protection of a framework that allows for variety and assumes that the solution today will not be the solution tomorrow.