Typically train stations in Japan sit in the centre of towns and cities, acting as gateway, and even destination, for communities across the country. But that function is purely practical - the idea of a train station taking on the added duty of urban symbol is for all intents and purposes unheard of. Instead, the first thing a visitor sees on arrival and the last thing viewed on departure is a busy parking lot, with a small strip of land left over for pedestrian navigation.

There are benefits to the typology. The lack of pretension makes for clear structures, and with the organisation of most stations standardised across the nation, it is possible to feel at home no matter where you are. On the other hand, a typical station divides an area by its presence, literally cutting off one part of the city from the other. If a station sits on the urban fringe this is perhaps not a problem, but when it is in the middle of the city the result is often negative. Similarly, the lack of public ceremonial space wastes a natural gathering place for centre residents who live in an urban setting where such opportunities are already scarce.

Toyama station currently fits this mold. Plazas to the north and south are nearly perfectly separated - by car or by foot there is no direct path through the site. In itself that is not an unforgivable situation, however the city has spent enormous time and effort developing both sides of the station as though they were not separated. To the north a redundant canal has been transformed into a luxurious park, with a new opera hall and other amenities attached. To the south a new city hall has been built along with commercial developments. Each area is intended to partner with the other. And yet they are isolated, and the effect of development severely blunted.

Our design for the station and the master plan for the area surrounding it attempts to make the physical infrastructure invisible, reconnecting north and south as seamlessly as possible. The concourse is raised from the ground in order to achieve this effect and to also create room for commercial space and for parking beneath the rails. An existing lite rail system and roads truncated by the existing station can then be connected, and a continuous landscape created to stitch the two sides together. At the same time with roads newly connected it is possible to re-arrange vehicular traffic, including taxi-queues and bus lanes, to these roads so the plazas in front of the station can be devoted to communal activities and to urban green space. A new theatre complex demarcates the plaza space more clearly and adds an entertainment destination to the neighbourhood.

The station itself is reduced to a perforated roof, shaped to mimic the mountains nearby. Exterior walls are all filled by glass so that the first and last glimpse of the city is not found at the entrance to the station but at the platform itself. 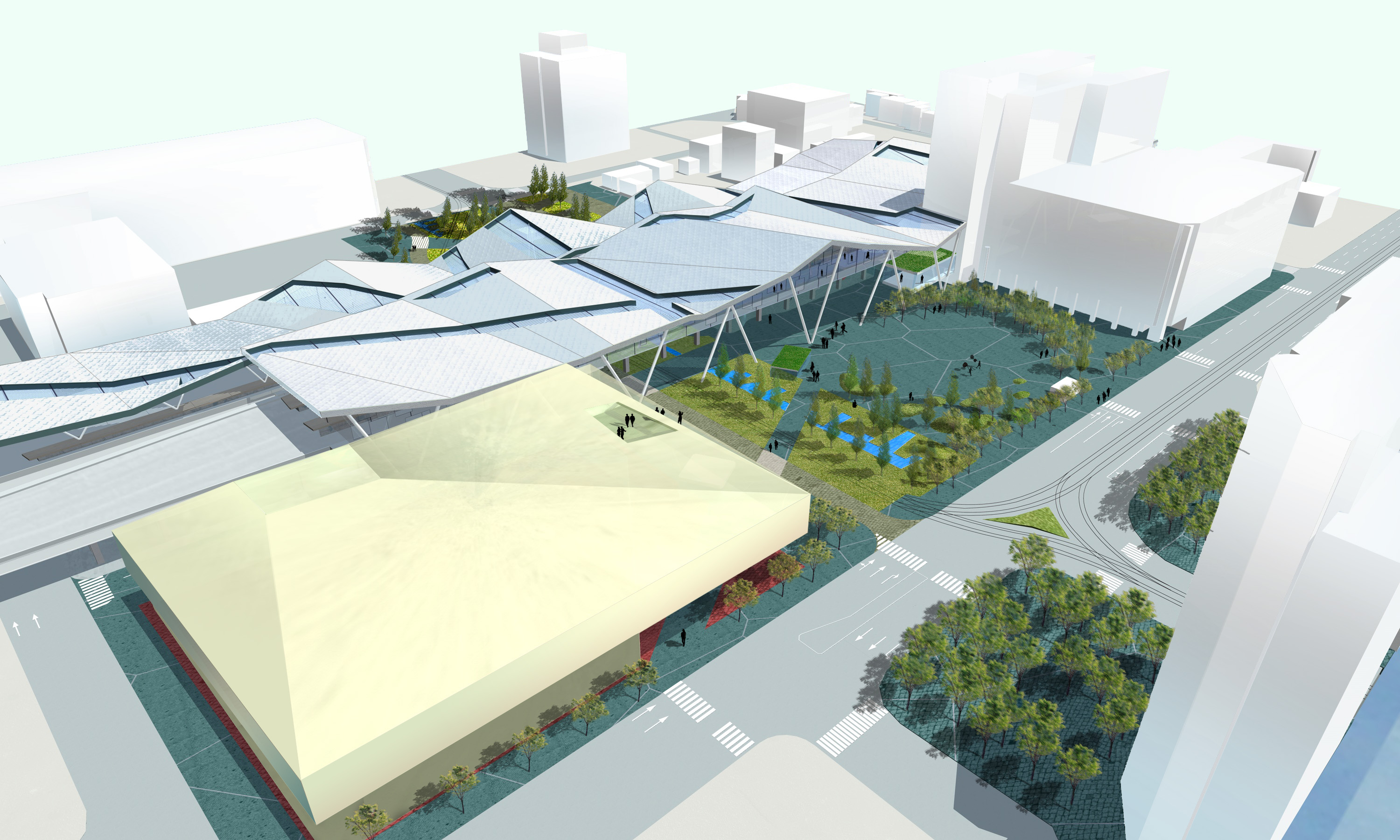 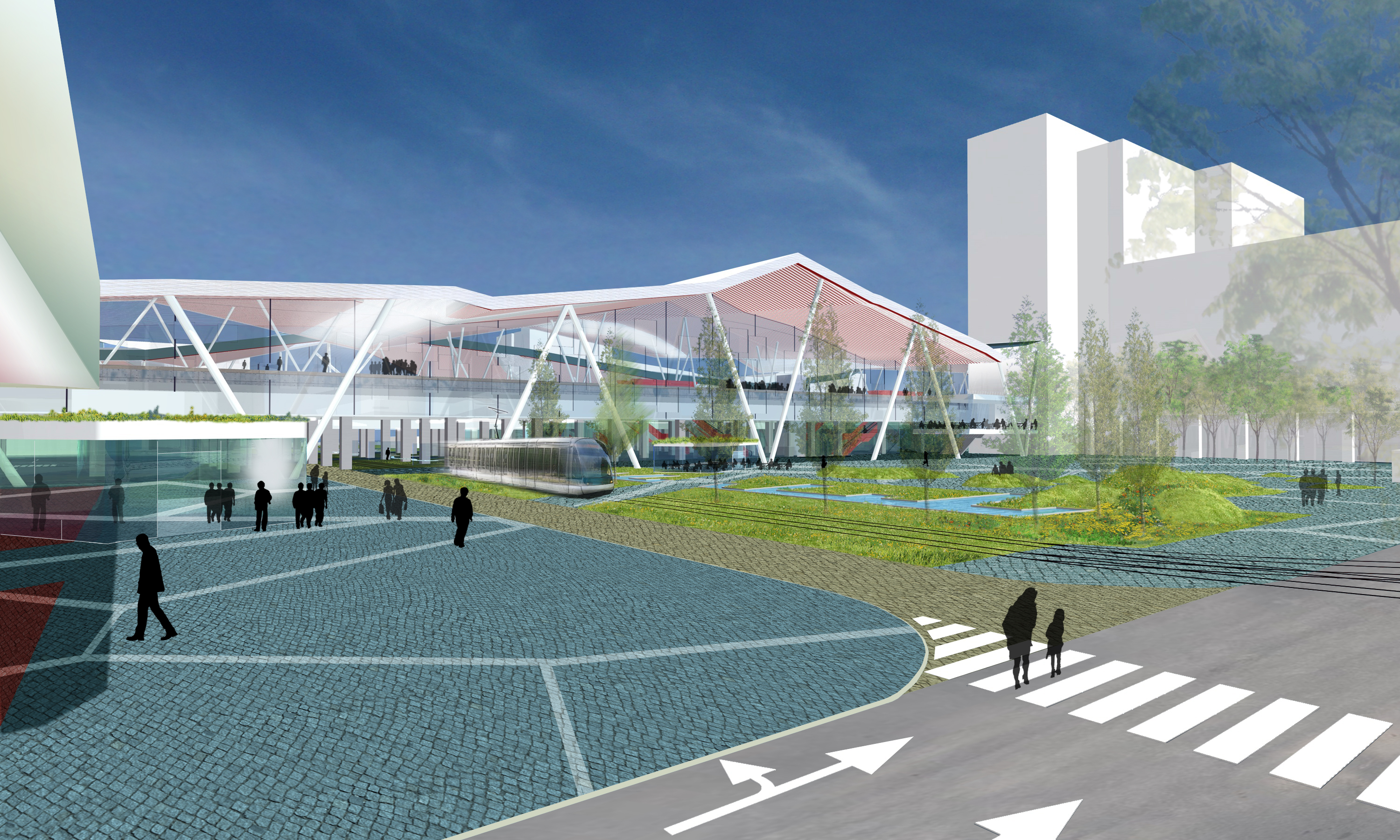 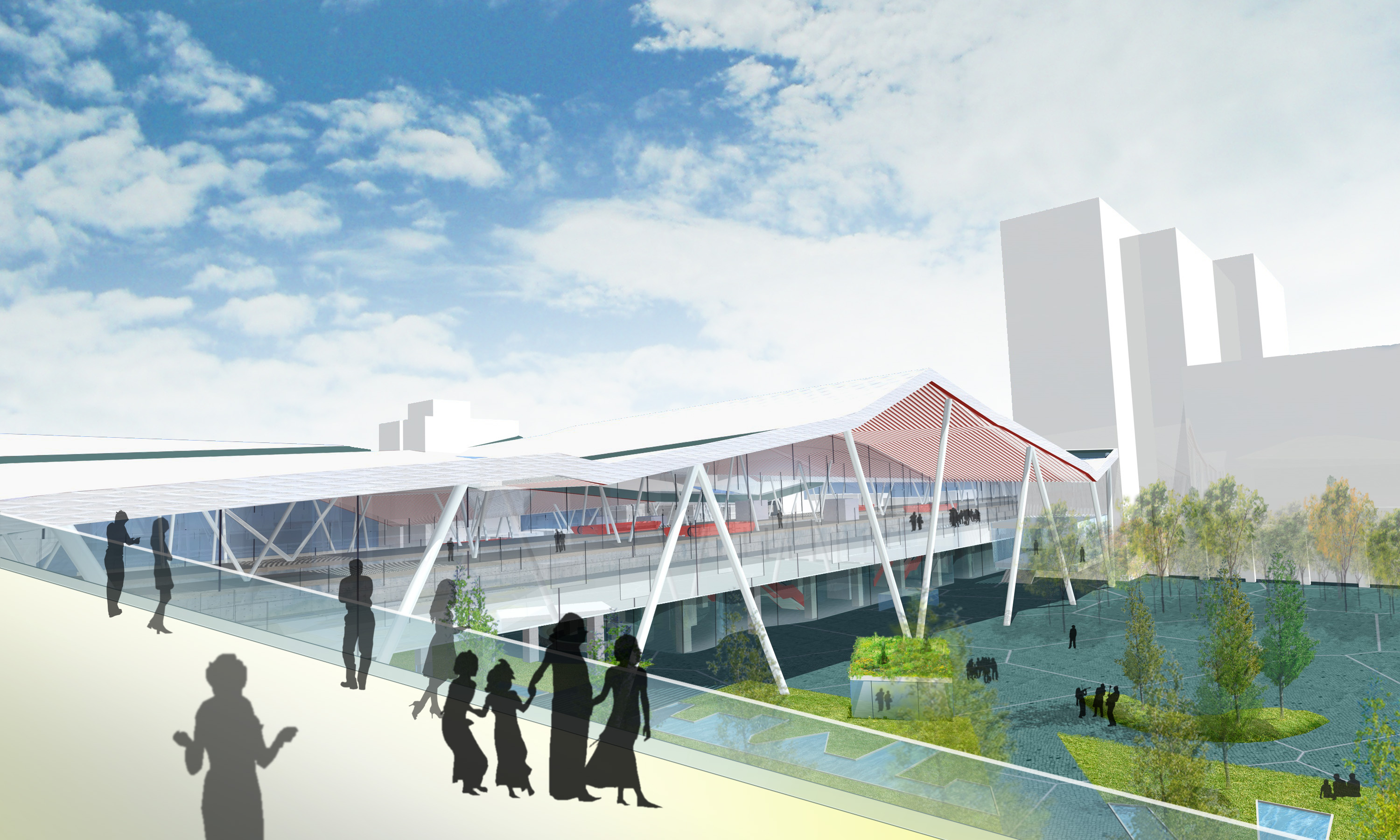 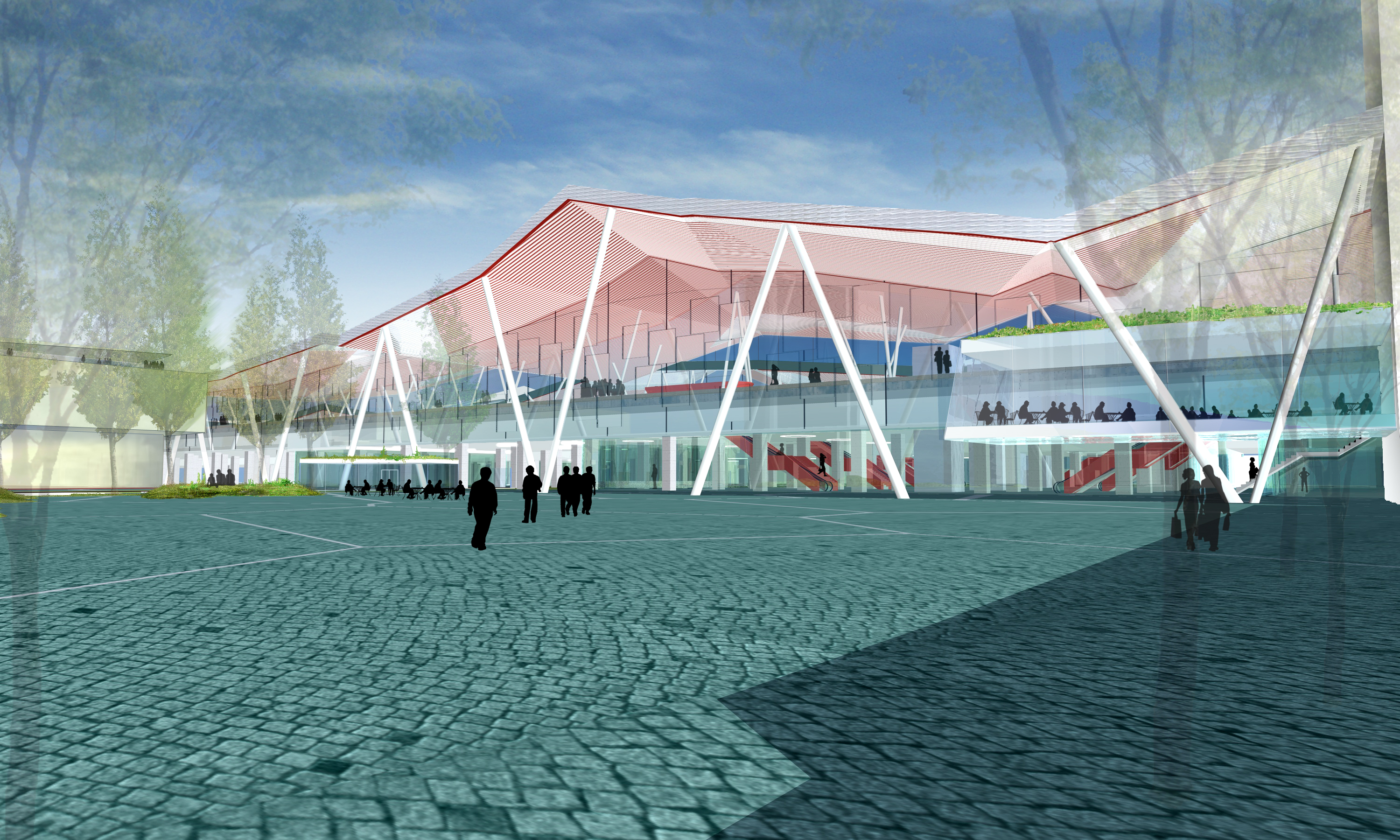 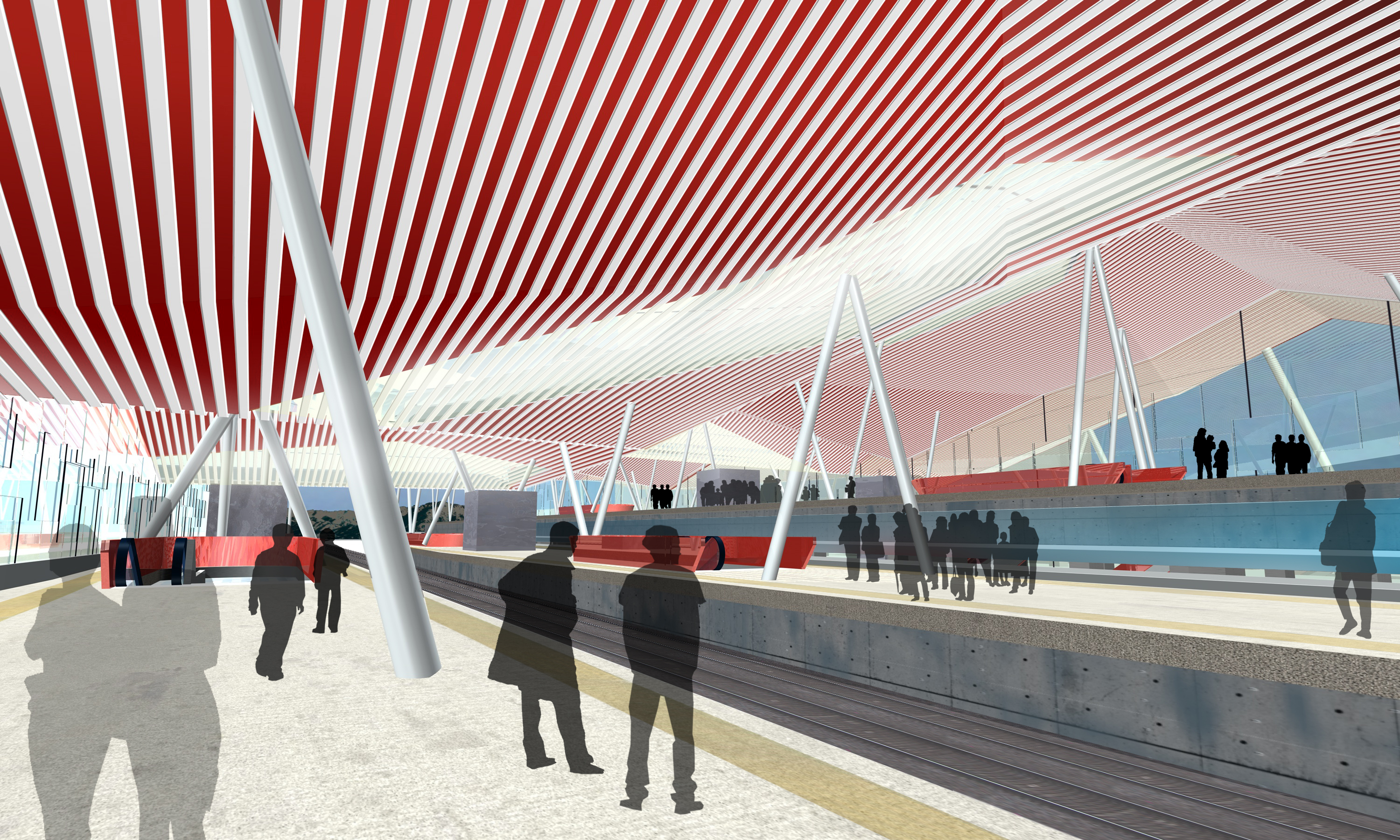 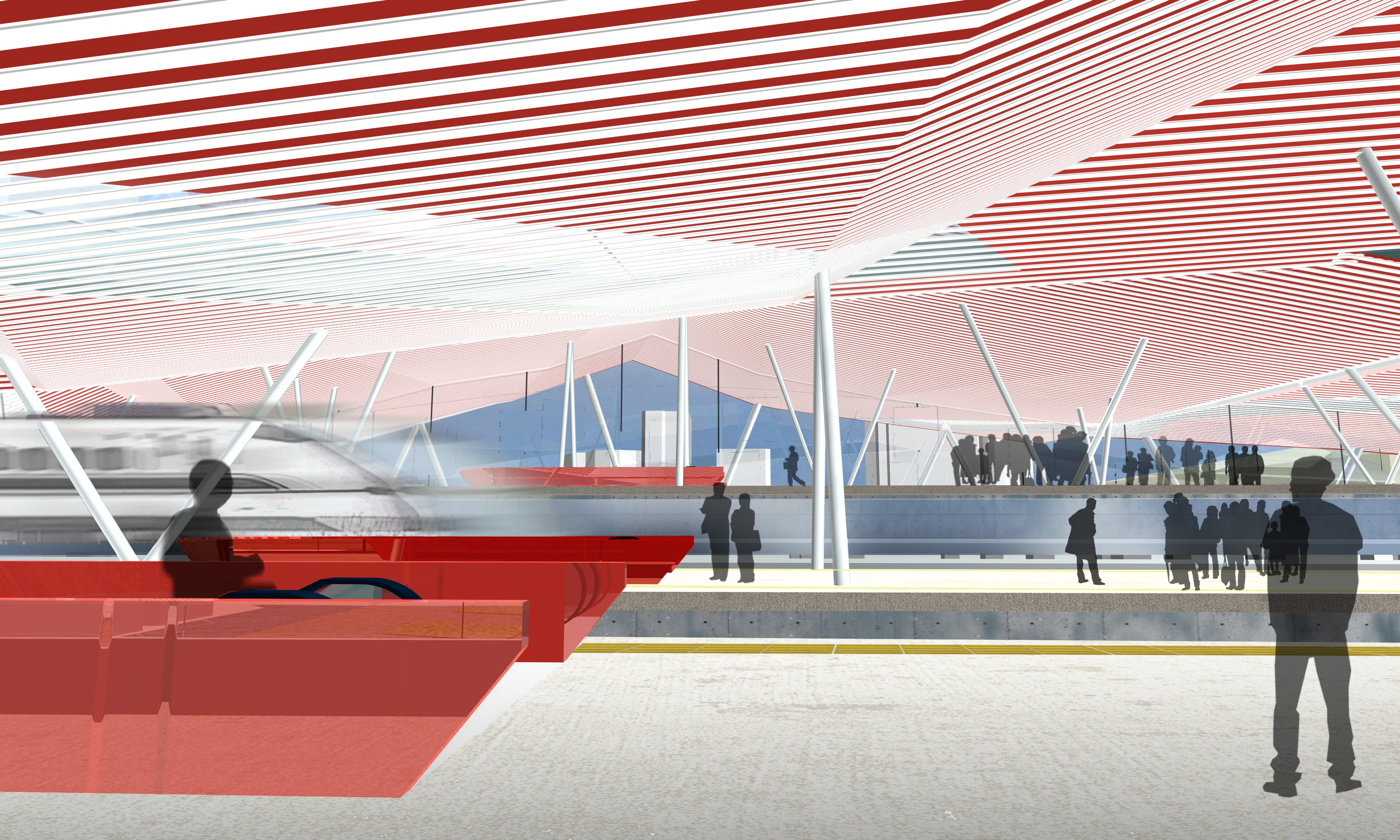